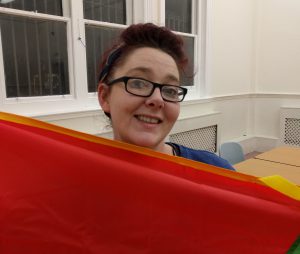 Cassie completed a BA in Performing Arts at London Met before completing an MA in Applied Theatre at Goldsmiths in 2010. Since then she has worked non-stop in the field of applied drama leading workshops in a variety of areas from exploring domestic violence to looking at substance abuse and working with adults with learning difficulties. Cassie uses arts and crafts in her multi art form approach and is a talented mask maker. Cassie currently works closely with Croydon Council Youth Arts team and supports socially excluded young people in a variety of settings across London.

Cassie loves unicorns and wants to be one!

Hazel studied drama at The University of Hull before joining Angel Shed Theatre Company as a volunteer theatre practitioner in 2010. Alongside working as a practitioner she supported the company with their fundraising and administration in the role of trustee for 4 years, Hazel has worked with a number of groups supporting children and young adults with additional needs in both youth work and drama led settings. Hazel loves the arts in all their forms, and is currently Community Arts Manager at Holborn Community Association alongside her role as Development Director for Knots Arts.

After studying Drama the University of Bristol, Bex started training as a drama facilitator in 2010 with Peckham Shed, an inclusive children’s theatre company, before studying an MA in Applied Drama at Goldsmiths University. She has worked for groups specifically for children with mild autism and communication needs since November 2011 and looked specifically at this work in her MA dissertation titled, How is the term ‘lack of imagination’ affecting current arts practice when working with children on the autistic spectrum?  She worked at Sedgehill School as the Performing Arts Coordinator for many years whilst continuing her work with children and young people with learning disabilities as a support worker and with Mencap, Corali and Oval House. Bex currently works with the Barbican, Stratford Circus Arts Centre and Croydon Youth Theatre Organisation running bespoke projects and helping to better connect schools with the arts sector.

Bex loves anything Disney Pixar and is in love with Mr Prickle-Pants.

Diana completed her actor training at The Guildford School of Acting in 2005 and has enjoyed a career in TV and Theatre ever since.  Alongside her acting work she found a passion for working with young people and discovered a way to apply her skills in a different way when she started to volunteer with Peckham Shed inclusive theatre company in 2012.  Since then she has gone on to work with other organisations and charities all involving drama and young people both mainstream and with additional needs and hopes continue balancing both careers for years to come!

Diana loves athletics and can often be heard cheering Mo Farah down the home straight at various stadiums!

This website uses cookies to improve your experience while you navigate through the website. Out of these, the cookies that are categorized as necessary are stored on your browser as they are essential for the working of basic functionalities of the website. We also use third-party cookies that help us analyze and understand how you use this website. These cookies will be stored in your browser only with your consent. You also have the option to opt-out of these cookies. But opting out of some of these cookies may affect your browsing experience.
Necessary Always Enabled

Any cookies that may not be particularly necessary for the website to function and is used specifically to collect user personal data via analytics, ads, other embedded contents are termed as non-necessary cookies. It is mandatory to procure user consent prior to running these cookies on your website.